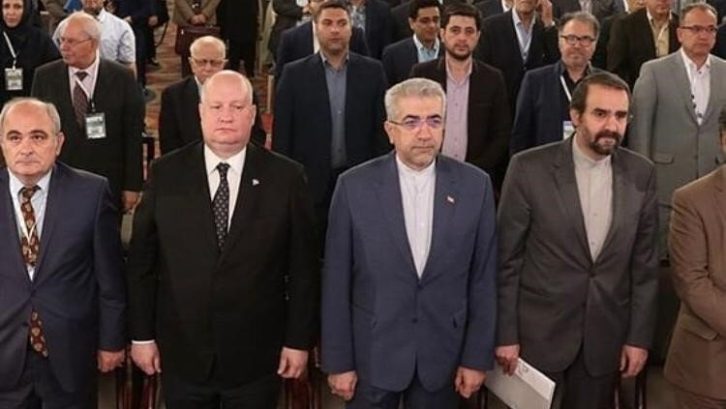 Iran and Russia are moving to implement two big Memoranda of Understanding (MOU), worth $2.5bn, in a bid to further boost their economic activities.

“Some of the big Iran-Russia projects are about electricity. We will build a 1,400-megawatt thermal power plant in Hormuzgan province by Russian government loan,” Iran’s Energy Minister Reza Ardakanian was cited.

The North Caucasus or the Commonwealth of Independent States (CIS) is the northern part of the Caucasus region between the Sea of Azov and Black Sea on the west and the Caspian Sea on the east, in Russia.

Ardakanian was referring to a MOU signed between Tehran and Moscow in 2017, based on which Russia will finance the construction of a thermal power plant in southern Iran through a Russian government loan worth 1.2bn euros. Tehran will clear this debt for five years at an interest rate of 2.77%, according to Iranian officials.

The 1,400-megawatt plant is about to be constructed in the city of Sirik on the shores of the Persian Gulf, close to the Strait of Hormuz until 2021.

Iran and Russia are also trying to finish the electrification of a 495-km railway that links the city of Garmsar, north of the Iranian capital Tehran, with the Iranian city of Inche-Borun on the border with Turkmenistan.

This major project kicked off on July last year. Islamic Republic of Iran Railways’ (IRIR) deputy for technical and infrastructure affairs Maziar Yazdani was cited as saying last year that it will take some four years to complete.

The project also covers the supply of maintenance vehicles and electric locomotives, as well as extension of technical assistance, during the first year of the project, the paper says.

A contract worth €1.2 billion was signed for this project between Iran and Russia in 2015.

“As per the agreement, electric locomotives will be manufactured inside Iran and in cooperation with Iranian firms,” Mohsen Pourseyyed-Aqaei, former managing director of IRIR, said at the time.

The electrification and upgrading project is scheduled to take 52 months and aims to increase the capacity of the route to 10 million tones/year, supporting the development of the North-South corridor between Russia, Central Asia and Iran east of the Caspian Sea.

The €1•2bn contract which Islamic Republic of Iran Railways, signed with Russian Railways’ export business on March 2017, includes the installation of 25 kV 50 Hz electrification, track upgrading to permit high speeds, re-signaling, the supply of electric locomotives and maintenance equipment, and the provision of technical assistance once electric services begin.

A five-year Russian export loan is financing 85% of the cost, with the Iranian government providing the remaining 15%, according to Railway Gazette.

The railroad, from Garmsar on the Tehran–Mashhad main line to Incheh Borun on the border with Turkmenistan, is part of a transit route connecting Kazakhstan and Turkmenistan to Amirabad Port in Iran’s Mazandaran province.

Russian Railways completed another similar project in Iran in 2012: The electrification of Tabriz-Azarshahr Railroad.

Abbas Nazari, the head of Islamic Republic of Iran Railways’ International Affairs Department, said an important element of Iranian cooperation is the International North-South Transport Corridor that begins in Europe and extends to India via Russia, Azerbaijan and Iran.

Russia is also in cooperation with Iran for the joint manufacture of railroad cars.

The Industrial Development and Renovation Organization (IDRO) signed a €2.5 billion contract with Russia’s CJSC Transmashholding in Tehran for the joint production of rolling stock in Iran.

Based on the contract, a joint venture will be formed between IDRO and the Russian company, with the Russian side holding an 80% stake and the Iranian side 20%.

On December 18, 2017, Russia signed a deal with Iran to finance €3 billion for the joint manufacture of 20,000 freight cars, 1,000 passenger cars, 350 locomotives and rail transportation equipment.

Ardakanian, who is the co-president of the Iran-Russia Joint Economic Cooperation Commission, called Iran’s joint a Free Trade Zone (FTZ) with the five-member Central Asian economic union a “win-win” situation, saying that it will create more jobs in Iran.

“If we meet the target countries’ standards, we can export very easily our agricultural and other products via land and railway to Armenia and from there to other countries. At the same time, grains exporting countries like Russia and Kazakhstan can export their commodities through Iranian northern and southern ports,” he noted.

The Iranian parliament passed last week a government bill that allows Iran joint the FTZ. The Guardian Council that oversees parliament’s laws, needs to approve it before it enters into force.

According to the Iranian minister, Central Bank of Iran and Russia will meet next month in a bid to hammer out details of their already rial-rubble trade.

Last September, Abdolnaser Hemmati, Governor of the Central Bank of Iran (CBI) said Tehran, Moscow and Ankara have agreed on a number of economic measures like removing the US dollar from their mutual transactions as part of efforts to expand their trade relations amid Washington’s pressure.

Novak said he had discussed with Iranian authorities development of oil and gas field on the southern continental shelf of the Caspian Sea as well as power engineering.

One of the 12 new MOUs, signed between Iran and Russia, is about modernization of Ramin Thermal Power Plant in southwestern Iranian Province of Khuzestan.

“We see joint initiative about investment in agricultural sectors, infrastructure projects in the Caspian Sea and strengthening ports capacities to increase cargo transit to Iran and Russia,” said Novak.

Iranian and Russian authorities signed a dozen more new cooperation documents in a bid to boost their joint activities before Iran joins the FTA with Eurasian Economic Union.

The two countries’ railways companies agreed to prepare the blueprint of construction of Sarakhs-Bandar Abbas, Chabahar-Zahedan, Bafq-Turban, Zahedan-Birjand and its connection with Bafq-Mashhad, as well as Rasht-Astara railways, the penultimate missing link in North-South Corridor.

Joint cooperation on aquaculture and pharmaceutical production as well as establishing tourist cruisers in the Caspian Sea are some other MOUs signed between Iran and Russia.