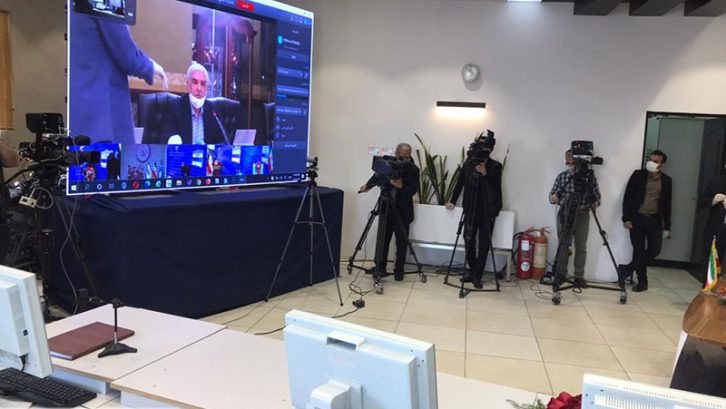 The third and final steam cycle of Parand Combined Cycle Power Plant was officially launched in an online ceremony.

Deputy Minister of Power for Electricity and Energy Affairs Homayoun Haeri and MAPNA President Abbas Aliabadi update the president on the project during the launching ceremony.

“All the main equipment of the power plant have been indigenized by MAPNA Group,” Deputy Power Minister reminded.

Haeri added that launching of the steam portions would save 855 million cubic meters of gas per year.

“Despite the coronavirus pandemics, MAPNA Group carried on the Parand Power Plant project with full force to ensure no power outage would occur,” said Haeri.

MAPNA President Abbas Aliabadi also retailed the background of the project and its major features. “MAPNA Group and Power Ministry have been pursuing conversion of gas-fired power plants into combined cycle power generation systems for several years,” he said. “Our goal is to upgrade Iran’s power structure and increase energy efficiency”.

“By converting more simple cycle power plants into combined cycles, we will accomplish several goals including an increase in efficiency rate of power plants from the current 33 percent to 50 percent, significant cut in pollutant emission, a 50% rise in power generation capacity without any need to construct new plants, preserving and increasing the employment rate in Iran’s sizeable power plant business, and channeling the saved fuel into other sectors,” Aliabadi added.

MAPNA Group President reminded that the company’s conversion projects included Asaluyeh and Ferdowsi power plants, in addition to Parand, which would increase their total capacity from 3000 MWs to 4500 MWs.

“MAPNA has achieved these goals without relying on state financial facilities,” Aliabadi said.

The main bulk of equipment in the power plant has been manufactured by MAPNA Group.

Given the importance of stable power supply for Tehran Province, the development of Parand Combined Power Plant’s steam portion began in 2014 under a buyback contract with Thermal Power Plants Holding Company, a subsidiary of the Ministry of Power. The first and second steam portions were commissioned in 2017 and 2019, and the final steam portion is now delivered in 2020.

With addition of the steam portion, the efficiency rate of the power plant has increased to more than fifty percent from the previous 33 percent. The rate stands at over 53 percent for those units running on upgraded MAPNA turbines.

The conversion will also save 855 million liters of diesel fuel and stop emission of 4.2 million tons of carbon dioxide per year.

The new cooling system of the power plant which relies on Parand County’s treated sewage will also help reduce the power plant’s consumption of potable water from 46 liters per second to 5.4 LPs, a major step in MAPNA Group’s realization of its environmental responsibilities.

Speaking of MAPNA Group’s budget for development of Parand Power Plant’s steam portion, Abbas Aliabadi reminded that this is the first conversion project carried out under a buyback scheme. “In a novel approach, MAPNA Group financed the project relying on the capital market and through exchange-traded funds,” he added.

President Hassan Rouhani praised efforts by the public and private sector during the online inauguration ceremony. “Private and public companies, institutions and all parts of the country will never sit idle for a moment for their country’s development despite fighting sanction,” he said.

“The opening of these projects and other projects worth 50 trillion tomans only in the power sector until the end of year bears the message that everybody is working hard for the development of our Islamic Iran” Rouhani said.