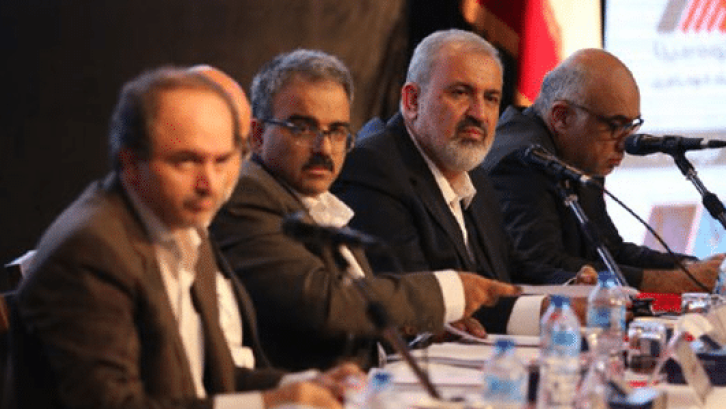 Achievements and Strategies of the Mapna Group in 2017

Dr. Ali Abadi, at the annual meeting of the MAPNA Group, described the group’s achievements in 96 years from planning to rebuild MAPNA’s capital from accumulated profits and supplying part of the stock of power plants in the stock exchange.

Dr. Aliabadi highlighted the economic issues of the country in 1396 and spoke on the continued management efforts of the group to receive employers’ demands from MAPNA.

Referring to the strong support of the country’s senior officials from the MAPNA collection as a resilient economy organization, she also referred to the multiple strategies of the MAPNA during the year 1396 in the field of power plants to “compete with international companies in world markets despite the dumping problem, focusing on the marketplace Project financing problems, Planning for conversion of gas units to combined cycle, Stages of transmission of class F turbine technology in partnership with Siemens, Contracts of partnership and partnership with internationally accredited companies, Optimal utilization of MAPNA power plants in the country, Use of ACC system direction Spent In the water and planning for the addition of the MGT-40 and MGT-75 turbines to the MAPNA product portfolio in the future, he announced: “Despite all the problems, MAPNA stands on its feet and has been able to shine on world-wide scenes and at prestigious international ranks Show yourself.

He stressed that, despite the lack of access to the MAPNA group from the National Development Fund, we were not disappointed, for example, with the project fund for the huge combined cycle project of the Power Plant and the supply of domestic resources for Assaluyeh and Toos projects, in the words Other, many of the challenges with these innovations in the MAPNA group become an opportunity.

Managing director of the MAPNA group, said: “Today, we are able to build every type of wind turbine required in the country, and we will provide a 4-megawatt wind turbine.”

He noted that the production and manufacture of a large list of equipment needed for power plants, oil and gas, rail transport and the new field of health is a great honor for MAPNAST, which in recent years has been domesticizing and meeting the needs of the country, Mapna has shaped.

Dr. Ali Abadi, in explaining the performance of the Mapna Group in the oil and gas sector in 1396, provided MAPNA services in phases 13, 14, 19, 20, 21, 22, 23 and 24 of South Pars, and the deployment of turbokompressors needed at stations at the national pressure boost, operations Marine and Dredging Drilling and announced the receipt of documents confirming the satisfaction of the employer in all projects.

He added that the MAPNA group in the Iraqi oil industry, having obtained the qualification certificate, has succeeded in registering itself on the list of main contractors for the drilling and development of fields at the same time from the country’s drilling company.

He noted about the operation of MAPNA in the rail transport sector: By the end of the contract, 150 Iranian ambulance locomotives were implementing a new contract for the production of 50 other such locomotives, as well as new contracts for the construction or reconstruction of the fleet of railroads Are. We are designing an electric locomotive, while the first time the MAPNA locomotive is delivered and the tunnel locomotives are also located in the mopena product portfolio.

“Another important task of Mapna is to equip the country’s cities with the subway,” he said. In the Subway Line 6, we also proposed to provide the MAPNA fleet line 6 and it seems to be welcomed by the employer.

Dr Ali Abadi, referring to the activities of the Kappa group in the field of investment, noted: In 1396, the MAPNA group was contracted to private or public sectors in Qeshm, Rudshur, Sabalan, Orumieh, Arusha and Zanjan, and many LC Projects are open or in progress. MAPNA has also entered the watershed for some time, which has been a very successful project in the field of Qeshm MAPNA Electricity and Water Co-operation, in which Qeshm water is named MAPNA, while LC also has a new 500 MW contract. We received a similar project with the same technology in Bushehr.

MAPNA’s Managing Director, referring to the actions of competing international companies in building infrastructure for health and medical activities, said on MAPNA’s strategic actions to build imaging equipment and meet the needs of medical universities, saying that MAPNA’s presence in the field of health is so valuable With the arrival of Mapna in this area, many of the same goods have been hit by a drop in prices. In the area of ​​ICT, despite the ever-increasing pace of developments, the MAPNA Group has created the first Power Status Monitoring Center (CM), which is very valuable as a post-sales service and its software and hardware are being developed. He said that electricity is very important in the new era and said: “We are on the side, and many of the big cities are moving towards electric vehicles, and we are trying to make this important in our country with native products and mpaña.”

Dr. Ali Abadi, at the end of the day, expressed his good news to the shareholders, of planning to rebuild MAPNA’s capital from the accumulated profits and supplying part of the shares to the power plants after the legal formalities in the stock exchange and said: We are trying to make this important in accordance with legal procedures Be executed.